Water damage can cause a headache, a disruption in your daily life, but also a foul smell. Sometimes the odor may not appear immediately, and perhaps water damage is only evident because of a smell. The smell may seem musty, or sharp, but no matter what the water damage odor presents as, it needs to be dealt with.

The Science of Scent

Neuroscientists have studied why human noses distinguish a good odor from a bad one. They believe it comes down to how ancestors survived that we distinguish so quickly that something is harmful or bad, and when something smells good. However, due to advancements in technology, researchers believe that things that smell worse have heavier and more spread out molecules. A heavy odor really does have heavy molecules. Yet, what does that have to do with water damage? Water is, after all, a very light molecule. H2O is a simple molecule to begin with. The answer may be, that it’s not the water that smells, but what is added to the water or the remains of it.

If it isn’t the water that gives off an odor in and of itself, being that your water damage was a clean water loss, then it will be the hitchhiking molecules with it. The mold that will threaten to grow where you think you had cleaned the water damage up. Trained and certified professionals know how to properly deal with water damage and effectively remove moisture. However, if not properly cleaned up, formerly harmless bacteria, found in the water, may become foul. If air is not properly moved, and enough dehumidifiers deployed for an adequate amount of space, excess moisture will not be removed. This is the source of odor. The musty or sharp twang in the basement after a frozen pipe burst. Worse yet, if professionals are not employed to extract your water loss, moisture can remain in your drywall, tile and even concrete.

The Goldilocks of Water Damage 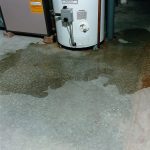 Odor from water damage occurs for many reasons. Some homeowners may not think there is water damage, only noticing the signs when there is a massive problem. Some owners think they can put off the problem, because it’s only a little smelly and they never go in the basement anyway. Aren’t basements supposed to smell a little, gross? Never ignore an odor from water damage, because it indicates harm for your family. While many articles suggest DIY treatments to get rid of a stench, the only solution suggested and safe is to call a professional. Professionals diagnose the water damage or odor, and then solve the issue. At Rainbow Restoration International of Northeastern Maryland, we help you eliminate the odor once and for all.

Water damage can occur without the homeowner even knowing it has happened. Sometimes, the only indication is an odor left behind. It may be musty or sharp, and is often heavy. Professionals need to be called to eliminate the odor of water damage because often the scent will remain in drywall, tile and even concrete if drying is done improperly.